Classics can be updated while still remaining classic. But there is a fine line that, if crossed, turns a classic into trendy garbage.

You may have noticed the shoes I was wearing in my last WIW post. They were a great match with the suit and added a bit of flair to an otherwise conservative kit (a little too conservative for my taste). It adds a touch of uniqueness without being too over the top.

But what are those shoes? What is the quality? From where did they come?
Read on.


The shoes are modern Stacy Adams, the "Kingsman" model. And while the Kingsman comes in attractive solid brown and solid black, it was the two-tone black and white version that caught my eye.
A solid brown or black shoe is the foundation upon which every good shoe wardrobe should be built, but once the bedrock is in place a sturdy wardrobe of non-conventional shoes can be created: shoes that are meant more for fun and dandyism than for work or conservative dress.
That is why I was drawn to the two-tone Kingsman: my conventional shoe wardrobe has been well filled, allowing me to concentrate on more eye-catching purchases.

Why the Kingsman? First, they are made by Stacy Adams. Stacy Adams is known as a producer of good quality shoes for a decent price. I would call them a high mid-range shoe company, a step under Allen Edmond and the like. 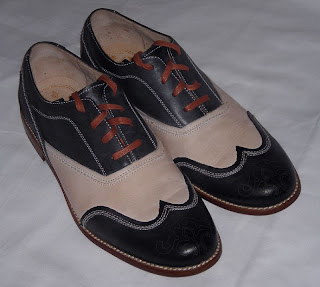 Looking at the shoes, you can see that they are in fact well made. The uppers are made fully of leather. The leather itself is fairly thick but soft and these shoes require a very short period of time to break in, though the shoe did rub my lateral malleolus 'bumps' raw at first.

The soles are made of man made materials (read rubber) but are sturdy and lack ugly lugs. 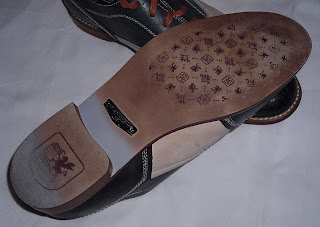 The heels are in a casual dark brown/brown/dark brown combination, continuing the two-tone trend throughout the shoe.


Along with the two-tone sole and leather uppers, the white stitching also contrasts the 'black' leather section of the upper. This white stitching adds a bit of a casual feeling to the shoe, allowing it to be worn like saddle shoes in combination with casual kits (jeans, casual button-down shirts, slacks, t-shirts, etc.). Even with the casual feeling of the shoes, they are still able to be worn with a suit as the top photo of this post demonstrates.

Here's where Stacy Adams put a slight twist on the classic spectator.
On the toecap of each shoe is a laser etched design much like the flames often painted on the nose of a vintage hot rod. 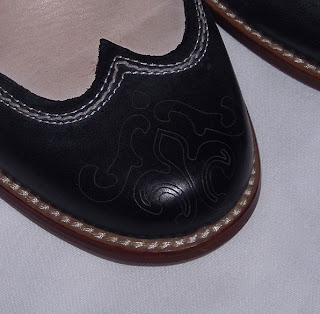 That subtle design adds a touch of 'rockabilly' or hepcat feel to the shoes, something desired by many these days.

Another interesting decision by Stacy Adams was the use of burn brown waxed shoelaces like those found on vintage athletic shoes. Just another piece of the puzzle that adds to the casual look of the shoe, one that I like very much.

You'll also notice that the 'black' leather isn't really black, it's a dark navy blue. Stacy Adams states that the Kingsman is 'weathered', giving it a bit of a vintage look. It is done quite well and the blue stands out nicely when compared to true black and white spectators, making it more versatile for use with both jeans and suits.

The general shape is pleasing to the eye and keeps with a more basic design when compared to modern shoes with their long pointed toes that may or may not curl upward at the end. Though it does not possess the desirable spade sole shape sometimes found on higher class shoes, the Kingsman has a classic wingtip design that is somewhere between 'sleek' and 'gunboat': an indicator pointing toward the casual. 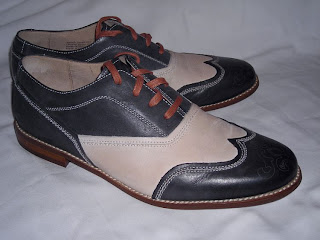 Other than the initial rawness on my lateral malleolus 'bumps', the shoes are very comfortable with moderate arch support. An insole would only add to the already comfortable fit. They appear to be true to size.

I purchased my Kingsman shoes for $85 shipped from Zappos.com. Shipping was quick and communication was good (there are also other very nice and well priced shoes on Zappos). You can also find the same shoes on other websites for a similar price.

I give these shoes two thumbs up. Stacy Adams walked the tightrope between classic and trendy with the Kingsman but did not fall off. If you are looking for a less dressy spectator that can be worn with either jeans or a suit, I would recommend the Stacy Adams "Kingsman".

Nice blog. Why is the last button on your waist coat buttoned? Is it an American tradition?

It's personal preference. Usually I leave it undone but felt like buttoning it that day.

Very interesting! I'd pretty much dismissed Stacy Adams as pimp shoes, but your review and photos make me reconsider. I don't know much about vintage clothes, but to me those do look like they fit right in with a vintage style. Nice job.

Still don't know about the flames, though.

Geez, how did it take me so long to find you?

You are my aesthetic hero.

Kurt, the 'flames' are very subtle and difficult to see unless in the right light. Definitely not the first thing folks will notice.

I've been following your blog for many months now. I really enjoy reading the posts, as I am into vintage stylings as well.

I picked up the "Kingsman" in the dark brown/tan color today for 60 dollars. I am really pleased with the shoes so far. I look forward to wearing them with my tan suit and dress slacks of the same color.

Thanks for the reccomendation!

Excellent, glad you like them. They're a good deal, I think.

Thanks for the review!,

Great information on this site thanks for sharing!
Stacy Adams Suits

the shoes are nice and beautiful. I really want this.

waxed Shoelaces have a disproportionate effect on the overall look a pair of shoes. A pair of old, worn out laces will not uphold the formal dress look that you want in a well-polished pair of shoes. 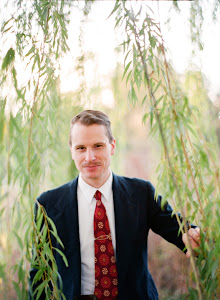